Главная › Translation of phrases in tattoos

Translation of phrases in tattoos 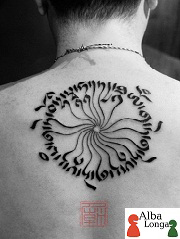 Tattoos containing a phrase written in a foreign language have become widely popular these days. Many wish to have an inscription in an Eastern language or other exotic script tattooed. Such tattoos not only carry a deep meaning but just look cool, setting the person apart from others.
If you wish to have one done, you can go ahead and let us know about it. No, we do not make tattoos per se, but we can provide you with a qualified translation of your tattoo into many existing and dead languages. For instance, such languages as Chinese, Sanskrit, or Old Mongolian. And we guarantee that you won’t be befallen by the fate of famous soccer player David Beckham, who ordered a tattoo with the name of his wife in it done in Sanskrit to later find out that her name is Vikhtoria.
The direction of translating tattoos is distinguished, first of all, by the need of increased quality control (checking what’s been checked already, several times), with regard to, most often, rare Eastern languages.
Our staff is composed of highly-qualified specialists who won’t make such blunders and make sure the tattoo owner won’t be burning with shame due to bad errors (provided, of course, that the tattoo artist reproduces everything correctly).
The price of the service:
for European languages — 700 rubles,
for Eastern languages — 1000 rubles.
To start working on your order, we require that you make a 100% down-payment.
Payment methods

★★★★★
“We would like to thank LinguaContact translation company for our fruitful cooperation in translation and subtitling of TV shows. While working on the project, LinguaContact proved to be an accurate, goal-oriented and highly responsive team of professionals.”
- T.V. Zubov, Head of Line Production Department (Comedy Club Production)
Read all reviews